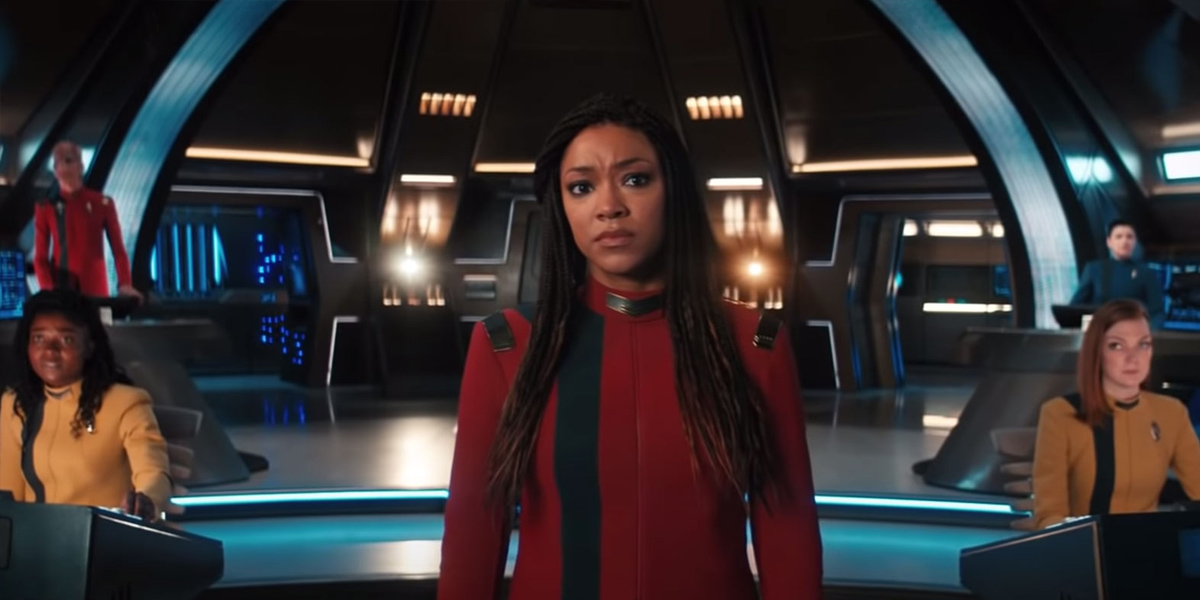 Martin-Green plays Michael Burnham, an orphaned human raised on the planet Vulcan by none other than Sarek (James Frain) and his human wife, Amanda Grayson (Mia Kirshner)—aka, Spock’s (Ethan Peck) parents. So she is Spock’s adoptive sister. As I’ve written previously, the S2 season-long arc involved the mysterious appearances of a “Red Angel” and a rogue Starfleet AI called Control that sought to wipe out all sentient life in the universe.

The big reveal was that the Red Angel was actually a time-travel suit worn by Michael’s biological mother. She had accidentally jumped 950 years into a bleak future in which Control had achieved its nefarious goal and had been traveling through time leaving signals (the Red Angel visions), hoping to alter that future. In the S2 finale, Michael donned a copy of her mother’s suit to lead Discovery over 900 years into the future. The crew of the Enterprise told Starfleet that Discovery was destroyed in the battle and was ordered to never speak of the ship or her crew again.

In S3, Michael, Discovery and her crew arrived in the future and found that Control’s plan had been thwarted: life still exists. But the galaxy was very different thanks to something called The Burn, a catastrophic event that caused all the dilithium in the Milky Way to explode and destroy much of Starfleet in the process. In the aftermath, with no warp drive possible, all the planets had become disconnected and were no longer governed by the Federation. Michael did, however, manage to locate one sole Federation liaison on a remote space station with the help of a new ally, Book (David Ajala).

It proved to be another strong season for the series. As Ars’ Kate Cox noted in her review last year, “S3 is absolutely Star Trek in the classic mold, where problems can be solved, where diplomacy can reign, where clever Starfleet officers can think their way out of any trap, and where the Federation and its ideals are Good, Actually, for this fallen world.”

The Discovery crew reunited with what was left of Starfleet, figured out what caused The Burn, and managed to defeat a rival syndicate known as the Emerald Chain, inspiring planets to start rejoining the Federation. Burnham finally became captain of Discovery after Saru opted to return to his home planet of Kaminar for a spell. And we bid a sorrowful farewell to Philippa Georgiou (Michelle Yeoh); a spinoff series is rumored to be in the works.

According to the official synopsis, in S4 “Captain Burnham and the crew of the USS Discovery face a threat unlike any they’ve ever encountered. With Federation and non-Federation worlds alike feeling the impact, they must confront the unknown, and work together to ensure a hopeful future for all.”

The trailer mentions a “gravitational anomaly” five miles in diameter moving through the galaxy—clearly the formable threat hinted at in the synopsis. This season looks to be another action-packed bonanza (with spiffy new Starfleet uniforms), reinforcing the themes of community and family so prominent in S3. We get glimpses of Vulcans and Book’s cat, Grudge. Co-showrunner Michelle Paradise has said that one big question for Burnham is how she’ll continue to grow and move forward now that she captains a starship and that Adira’s (technically deceased) transgender boyfriend, Gray, will eventually be visible to everyone, not just Adira. Other than that, we’ll just have to wait and see.

The fourth season of Star Trek: Discovery debuts on Paramount Plus later this year.

Apple Podcasts Subscription Launch Delayed To June Due To Last Minute Hiccups
Spotify Leaks Another Look at the Car Thing
We use cookies on our website to give you the most relevant experience by remembering your preferences and repeat visits. By clicking “Accept All”, you consent to the use of ALL the cookies. However, you may visit "Cookie Settings" to provide a controlled consent.
Cookie SettingsAccept All
Manage consent